AudioQuest's Dragonfly series is quite popular. These devices are known for delivering high quality audio despite only being the size of a USB stick. The Dragonfly Cobalt, which came out last year, is their latest model. It has a new and improved DAC chip, a quieter power supply, and an updated micro controller. The Cobalt not only sounds significantly better than older models, but it's also slightly smaller in size.

You can use it with any device that has a USB input, or connect it to your phone using an adapter (a USB-C to USB-A adapter is included). It offers seamless compatibility with Apple and Android devices.

It can handle virtually all file formats from MP3 to high resolution (up to 24-bit/96kHz), and it even has a very competent MQA renderer for decoding music from Tidal. It can also support high-end headphones without any problem. The only apparent thing that's missing is Bluetooth connectivity. That's not really an issue, however, as wireless connectivity doesn't really align with the overall purpose of the Dragonfly series.

Thanks to its compact and simplified design, the Cobalt makes the process of using a DAC as simple as it gets. It actually has no buttons or any kind of control on it. Instead, the volume is controlled through your device. There is only one USB input and an auxiliary port. You just plug your input and output to the Dragonfly Cobalt and you're good to go. It's very nimble and will feel like an extension of your headphone cable, making it seem as if you're not carrying an external DAC. Another huge plus of this device is that it has no battery that needs to be charged, so that's one less thing you need to worry about.

The Cobal is the perfect device to have if you want to get high resolution music out of your phone. You can just plug in the Dragonfly and forget it's there while enjoying high quality audio through headphones. Though it offers a lot less control over your sound, the Cobalt is the most impeccably minimalist DAC you can buy. 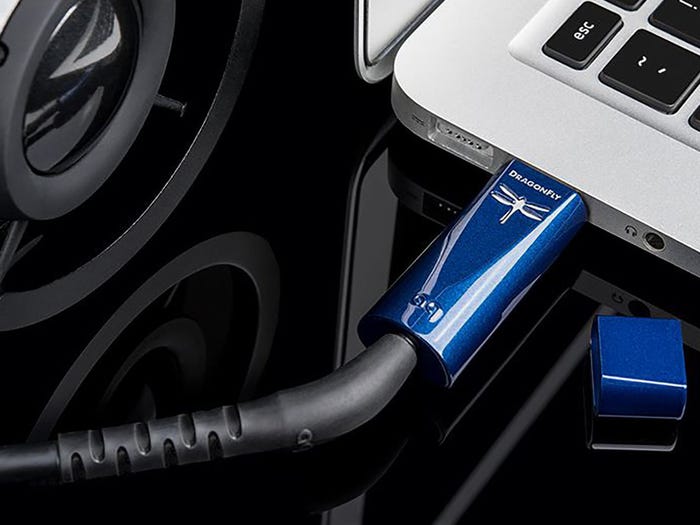